Type and press "enter" to search 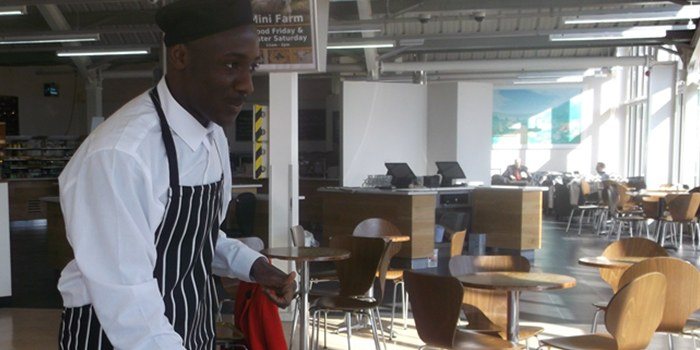 Getting a job is what many young disabled people dream of. Working in hospitality was Denzel’s goal – which Nash supported him to achieve.

Finding work can be extra challenging when you have a disability, which is why Nash College invests considerable resource in community-based learning and job skills. When Denzel arrived at Nash on a three-year course, which covered functional skills, personal and social development and vocational and community access, his goal was to get a job in hospitality or work outdoors.

The first task for tutors working with Denzel, who has autism and a severe learning disability, was to identify Denzel’s learning styles. Denzel’s strengths were following routine, listening well to instructions and working hard and enthusiastically. He needed tasks to be communicated visually using speech aids, symbol books and signing, and staff supported Denzel with the appropriate communication tools.

When employability and accreditation lecturer Sandra Kelly heard that a Sevenoaks garden centre was looking for voluntary help in its café, Sandra felt their requirements would be a close fit with Denzel’s abilities. Denzel started part-time work at the café, accompanied by support worker Julie from Nash. Julie liaised closely with Nash’s allied therapy team to make sure Denzel was given the best possible support to succeed and she worked with the café manager and Denzel to make sure Denzel could access what he needed to do the job, and to establish clear routines he could follow. His role was clearing and wiping tables, taking dirty dishes to the kitchen and other cleaning tasks around the café. As Denzel became familiar with the job, his reliance on his support worker lessened and his confidence grew.

Café assistant Elaine, who worked with Denzel, said: ‘He is a really lovely young man. He really does smile 24/7, got on with his job and worked really hard. He was a pleasure to work with.’ When Denzel, who doesn’t communicate verbally, was asked how he felt before he started the job, he signalled a ‘thumbs down’. This turned into a ‘thumbs up’ when asked how he felt when he got the job – and an even more enthusiastic response when asked if he liked his job.

Denzel’s enthusiasm and skill set so impressed his employers that they offered to put him on the pay roll: ‘They were so pleased with his work that they offered him four hours’ paid work for when he left Nash,’ says Sandra. ‘They also said should he wish to work closer to home when he leaves college, they will write him a reference. This has led to Denzel getting work when he left Nash.’

Send this to a friend